Long time since my last blog! Anyways, this time during CTF 9447 I tried to resolve the booty challenge but did not have success on finding the vulnerability during the game. Thanks to barrebas blog I understood where the vulnerability was and then proceeded to complete it.

I am not going to explain how Format String works since it is fully documented everywhere, I highly recommend to read Alex Reece blog about this topic before moving forward.


When running booty for the first time you are prompt to enter a pirate name for what looks like a Arm Wrestling game:

Who will become the next PIRATE KING?
If ye want the power and glory for yourself then show your worth!
Face the other challengers in a mighty arm wrestle and prove your right to rule.

What be ye fearsome pirate name?
>

After entering the pirate name, you are prompted with one of three available fight status:

Where "Beer Wench" is the name of the opponent.

Every time a fight status is displayed you need to select an action to take:

If the right actions are selected (push when exhausted, rest when tense up and hold when flexing their muscles) , eventually the pirate will win the game and below message will be displayed: 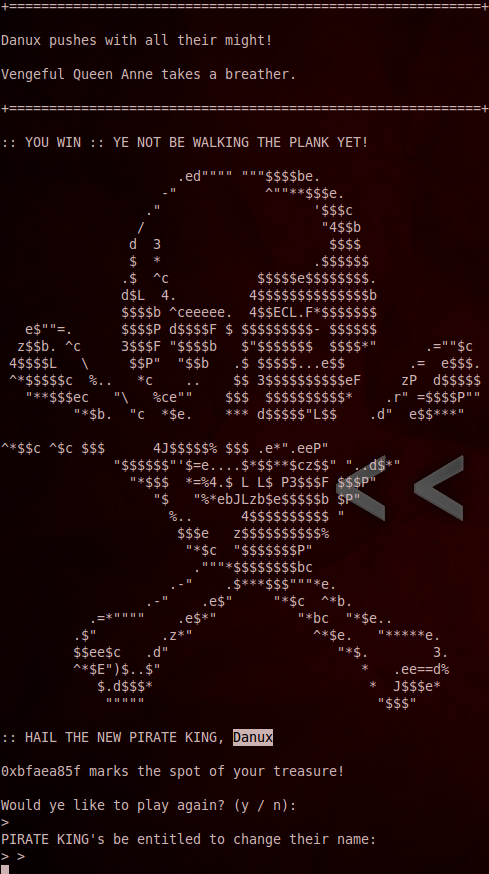 The game asks the end user to change his pirate name and start again, it also prints a stack address that can be helpful to defeat ASLR if needed:

0xbfaea85f marks the spot of your treasure!


The format string vulnerability exists in the vfprintf function printing the pirate name entered, there is no format (e.g. %s)  passed as parameter to the function and therefore can be manipulated by the end user:

However, if we try to enter a pirate name with the % character it will be removed by below function: 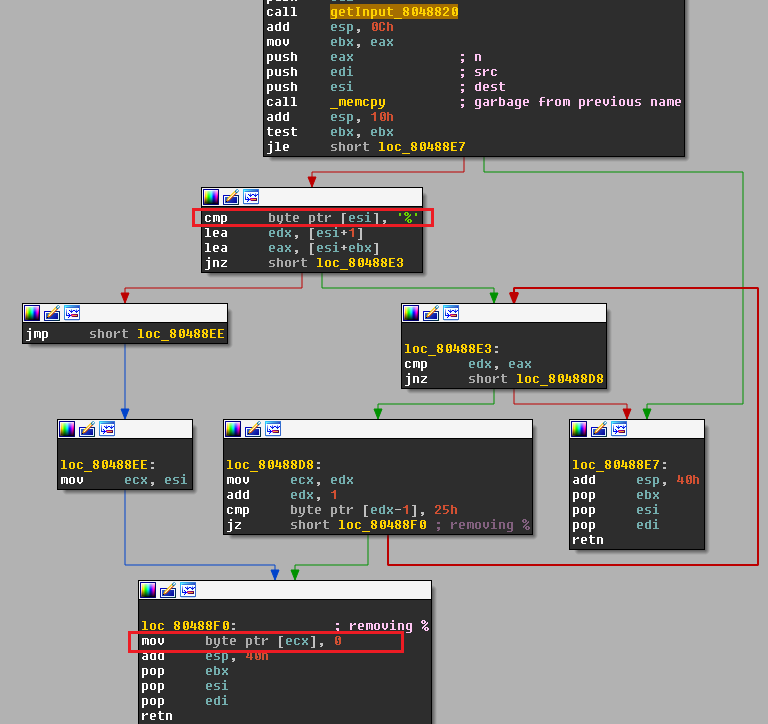 But there are two bugs in above function:

a) Only the first percentage sign will be removed from the string entered, therefore if the pirate name is: %AAAA%p it will be changed to: 0AAAA%p. But because of the null char at the beginning, we cannot trigger the vulnerability yet. Here comes the second bug to the rescue.

b) Once we win the game, we have the chance to change the pirate name however, the memcpy function does not clean its buffer before reading the next pirate name and therefore we if we enter a single "B" the new name will end up being BAAAA%p

Let's replicate our assumption explain above, by entering %AAAA%p as the first pirate name and B as the second, and we get below result: 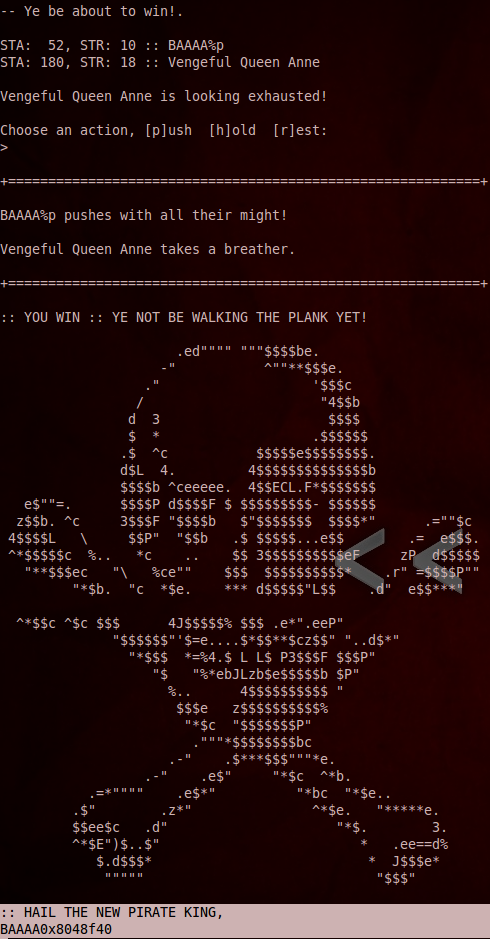 We confirmed our assumption and also at the bottom we can see a leak address 0x8048f40 when printing the pirate name, confirming the format string has been successfully executed.


From here on everything is fun, we have multiple options to gain code execution, one of the ways to exploit format string is by overwriting a key pointer to redirect the execution flow, for this, we need to gather some requirements:

a) Decide the pointer to overwrite: Always a good pointer candidate to overwrite can be taken from the relocations table where:

"relocations are entries in binaries that are left to be filled in later -- at link time by the toolchain linker or at runtime by the dynamic linker. A relocation in a binary is a descriptor which essentially says "determine the value of X, and put that value into the binary at offset Y"

Although with ASLR enabled, the base address of the functions will be different, the offsets at the relocation tables are always the same and therefore our exploit can be reliable. We can confirm this, let's list the relocations from booty:

The Offsets are listed on the first column, let's focus on the last row related to vfprintf function, at offset 0x0804a138 there will be a pointer to vfprintf function which will be calculated at link or run time, below we can see that by running booty two times the offset contains two different pointers:

What we are going to do is to change the pointer at this offset 0x0804a138 so that as soon as vfprintf is called it will point to our desired address!!!

b) Now that we found the pointer to overwrite, now we need to decide where do we want to redirect the execution flow?  At offset 0x080487C0 we can see a function that opens a flag file  and prints its content out to the screen, this function cannot be reached directly by the program though, so we will force booty to jump here: 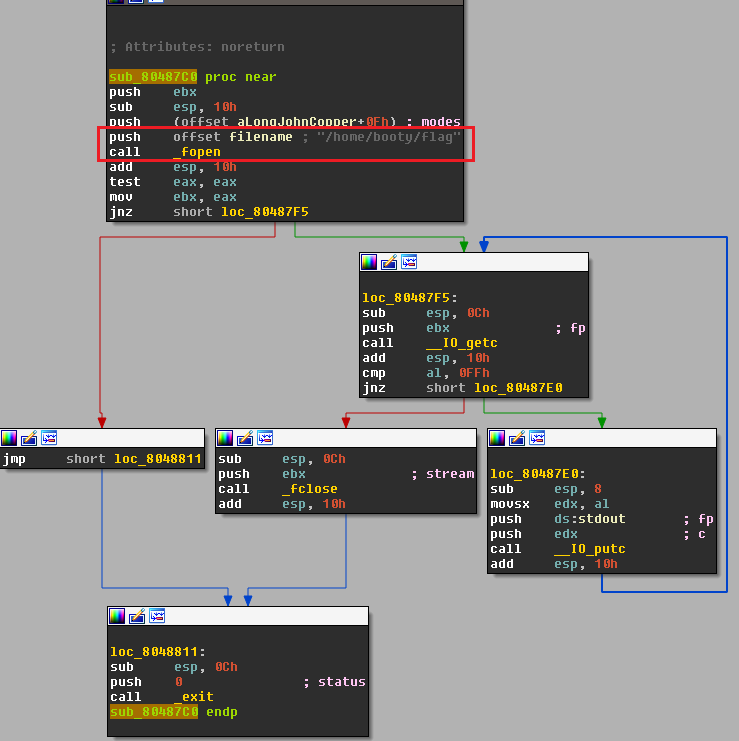 c) We have the relocation offset to manipulate, the destination address to redirect the flow but how do we actually fulfill this? I highly encourage you to read this excellent blog for detailed steps.


First we need to place the address to be overwritten in the stack and calculate the argument number so that we can control it via % later.

As explained in the Introducing the game section, in order to bypass the filter, we need to insert the first name as:

Assuming the first % will be changed to 0, once we win the game and are prompted to change the name, we entered: 0x3a giving us a final name as:

In order to test it,  you can run booty via socat as usual:

Then execute the exploit which must have a raw_input() instruction to give us a chance to attached gdb (full exploit at the end): #./exploit_booty.py

And finally in another window we run:

Before letting gdb to continue, let's set a breakpoint right before triggering the format string vuln at:

We let it run two times so that the two names can be entered:

Once the breakpoint is hit we print the stack content:

If you do the math and count all the dwords in the stack skipping the first one since it is the return address, you will realize that the two addresses entered belong to the arguments 30th 0x0804a13a and 31st 0x0804a138.

Then the next step is to confirm we can change its content, so, if you remember we were planning at point b) above to filled this offset with the address: 0x080487C0, since we are going to overwrite only two bytes at a time we will split the target address into:

Here is where the specifier %n comes into play, below its man page definition:

The number of characters written so far is stored into the integer indicated by the int * (or variant) pointer argument. No argument is converted.

What we just learned is that the specifier %n will stored at a provided address the number of characters written so far, that is the reason the string "this does not count" was not added to the final count. Also, we can manipulate argument number to use by %n which is the address to store the final count by using the dollar sign:

With all this features learned, we can come up with a request to overwrite the higher two bytes at address 0x0804a13a with 0x0804 assuming the target address is located at the argument 30th:

Let's test what we just learned by sending to booty the pirate name:

Again we set a breakpoint at 0x08048a30 and once we hit the breakpoint we step into the function to trigger the vulnerability, before executing vfprintf call we print the value of our higher two bytes of the target address:

Then we proceed to execute the vfprintf and print the content after:

Two important changes to point out with respect to the previous request, here we are using the two higher and lower bytes of the target address and therefore 8 bytes are sent before the $hn parameter which lowers the size sent before from 2048 to 2044 to keep the final size of 2052, we can see that the second size is equal to 32700 why? Remember that the bytes to overwrite are: 0x87C0

Finally, by running the final exploit we can see that right after triggering the format string we have successfully overwritten the original pointer to vfprint to 0x080487C0 which is where the flag is printed out:

So, if we keep stepping into the code as soon as a vfprintf call is made it will jump to our desired place:

Hope you enjoy it!