DISCLAIMER: First off, all the information found here is for EDUCATIONAL PURPOSE ONLY. The author is not responsible for any misuse.

IMPORTANT: The intent of my posts is to share knowledge and grow together, so if you find something that you think is inaccurate, feel free to let me know and together we can prepare a better document and learn together. I am not a Hacker, Cracker or something similar, just a hot-blooded Security guy who wants to learn and share. So, if you want to start criticizing without proposing anything, I will just ignore those comments.

Audience: Not for Junior/Senior Malware Analyst but for starters.

Acknowledgments: I want to thank Phil Fuhrer who realized we were dealing with TDL-4 and who found the ROR procedure to encode part of MBR code.

Personally, every time I read a blog from AV guys, it is hard to understand since it is too technical, which is good for those who are working on a daily basis on Malware Analysis-related efforts, but what about the community who wants to start in this field? They will need to know the step-by-step process to start entering into this area and most important to got interest. That is the idea of these "101 Approach" Series... to learn from scratch!!!

Introduction:
I started analyzing the rootkit/bootkit known as TDSS. TDL-4, at the beginning I did not have any idea about the behavior of this threat so we start gathering information from the community and I end up with an excellent article from Kaspersky explaining this new variant. When I started analyzing the aforementioned article, I realized the writers just got to the point (as expected) and skip too many details of the analysis.

The intent of this "101 Approach" series, is to document the "gray areas" not described in those technical articles, as well as mention the new variants with the Malware I got in my Lab so that, if you are a beginner in this field and not a technical guru, you still will be able to understand/follow the internals of this bootkit.

In this Part 1, I will analyze only the bookit portion of the Malware.

Master Boot Record Infection (MBR):
As mentioned by Kaspersky, this new variant infects the MBR, and here is the first "gray area" that need more explanation. In order to understand how the MBR is infected, you first must understand how MBR works. An Examination of the Standard MBR is an old but excellent article where you can understand the way MBR works as well as the assembly code associated.
Get the first

What this code does is to copy MBR code itself from memory location 7c00h to 600h. This is done since later on MBR code will load the Boot Sector of the Active Partition in to the same area of memory (7C00h) that it was first loaded into.

Basically, the code uses movsb instruction to move one single byte at a time, from SI = 7C00h to DI= 600h, so in order to move 512 bytes, CX register is used as the counter 200h=512d and the REP (repeat) instruction to loop and copy the whole sector into the new location.

By looking at the next instructions within the MBR sector, we confirmed the bootkit was using a basic ROR (Rotate right) method to obfuscate/encrypt some code as explained by Kaspersky blog, so let's analyze how this obfuscation works and the address space affected. Below is the chunk of code that implements the encryption process: 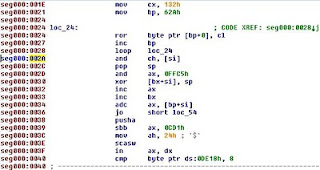 Before starting our analysis, make a note of the instructions started at offset 2A, those are currently encrypted, you will see the difference below once those are decrypted, so far, those instructions make no sense, right? 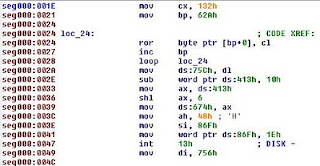 The Regalado-ROR.pl script is shown below, for you to use it in new variants of TDL-4.

Next step is to understand what the decrypted code is going to do, as per Kasperky blog: "The main function of the MBR loader, which is small in size, is to search the rootkit’s encrypted partition for the ldr16 component, load it into RAM and pass control to it."
But again, let's analyze this "gray area" since there are many internal steps before taking above conclusion.

The main feature to understand here is the interruption 13h or INT 13 which basically uses different functions to read, write, lock, unlock, eject, etc, hard disks and removable media. There are two types of int 13h: 1. The legacy INT 13
The Extended INT 13 interface
We will concentrate our analysis in the second option, the Extended INT 13 interface since our Malware uses the options 42h and 48h to commit its malicious actions.


The article "Enhanced Disk Drive Specification (EDDS)" details all the futures of this interface, as well as the "Disk Address Packet" structure mentioned above. Moving forward, let's analyze the first chunk of the decrypted data, basically, you will notice that the INT 13 is being called with the extension passed via AH register, in this case 48h, which means, Get the Drive Parameters. See image below:

AH is set to the extension number required, in this case 48h.

:003E - Offset in memory to store the result buffer. The result buffer is were all the parameters of the hard disk will be stored and it is explained in detail in the EDDS article.
:0041 - Maximum buffer size: Located at offset 0 (86Fh).

As explained above, the result buffer will be loaded starting at memory offset 86Fh. Sixteen bytes ahead of this offset (at 87Fh) is located the 8-byte value of the number of sectors of the disk, by reviewing the memory dump of the affected system, we confirm that this value is: 9502F90, as shown below:

But, wait a second, why does the Malware need the hard disk parameters?
Response: The total number of sectors of the hard disk is going to be a parameter used by the INT 13 extension 42h to know the last sector to be loaded in memory! See next section for more details.


So, let's analyze the INT 13 with the extension 42h, which means, load data from disk into memory.

The function sub_76 (name represented by IDA) contains the logic to the decrypt the sectors stored in the hard disk, as an overview, the main steps of this function are shown below:
So, as mentioned above, the first step in this process is to load those sectors in memory as shown in the chunk below: 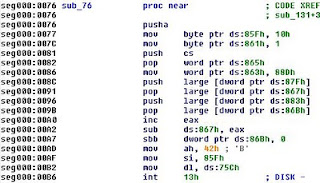 You will need to check the EDDS article to understand the parameters required for this extension.
Note: To help in your calculations, DS = 0.

007C: Number of sectors to transfer. It is set at offset 2 of the Device packet driver which corresponds to offset 861h in memory.
0086: Address of Transfer buffer: Address where the sector will be loaded in memory: 88Dh.
008C - 009B - Starting logical block address - LBA: The sector from disk to be loaded. The 8-byte-syze address is copied from offset 87Fh to 867h in memory via push and pop instructions.

By looking at the memory dump we found this LBA value: 000009502F59 at offset 8, but that does not mean this is the only one, actually, my assumption is that this is the last one copied from disk to memory (we confirmed this below), keep in mind the Malware will load different sectors from disk to memory.
So, as explained above (see section 2.1), we confirmed that the last sector of the hard disk is the first one loaded in memory, in our case the value is: 9502F90 hex = 156250000 dec.

00A2: Every time a sector is going to be loaded in memory, the total number of sectors is reduced by EAX times (1, 2, 3 and so on), this way, some sectors from the disk (starting from the final one) are copied to memory in every loop.

00A7: The 4 Higher bits of the LBA address are subtracted by 1 in case there is negative number: The sbb instruction is used since we are dealing with 16 bit registers and therefore we need to take care of the borrow when a negative number is reached.

In our code shown in the figure above, the four higher bits start at offset 86B since it is in little-endian order.

00AF: - The int 13h will use a structure called "Device Address Packet" which its offset is at DS:SI in memory. Here we can see the offset is at 85Fh.

Quick note:
a) Number of bytes per sector of your hard disk: Can be found by looking at hard disk properties (you can use the linux command dmesg to get this info) in our case this value is 512 bytes per sector. b) Number of sectors per disk: via dmesg command or: total bytes of hard disk / 512.
NOTE - LBA:

"With LBA, instead of referring to a drives cylinder, head and sector number geometry in order to access or "address" it, each sector is assigned a unique "sector number". In essence, LBA is a means by which a drive is accessed by linearly addressing sector addresses, beginning at sector 1 of head 0, cylinder 0 as LBA 0, and proceeding on in sequence to the last physical sector on the drive, which, for instance, on a standard 540 Meg drive would be LBA 1,065,456." by http://www.dewassoc.com/kbase/hard_drives/lba.htm

Below is the memory dump showing the confirmation of the new values identified:

Which means, the data is being loaded at offset 88Dh in the memory space.

Something to keep in mind is that the LBA address found at memory was 09502F59 and the last sector is 09502F90, this could be the range copied (backwards) from disk to memory, we will confirm this later. Quick tip-Getting sectors with dd tool: 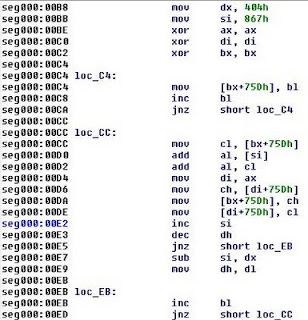 00C4: The code will zero out all the bytes starting at offset 75D and until 85C, why only FFh (255 bytes)? because the loop is calculated based on BL register which is 8-bytes length and therefore after FFh the next value is 100 (BH=01 , BL=00) which sets bl to 0 and the loop ends. From 00CC to 00ED the same range (75D - 85C) is set with different values based on multiple calculations.
Decryption loop:
In the first two instructions of below code we can see that since the last byte affected by previous code (see above) was at offset 85C, now, the next byte to be change is at offset 85D and then 85E, this shows how the bootkit is preparing the proper bytes to be used during decryption process. 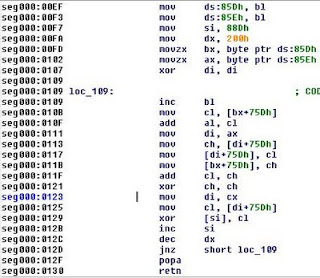 The decryption loop starts at offset 0109, some calculations are performed to calculate the encryption key, which is going to be stored at register CL, and finally at instruction 012B the XOR function is executed against the content where SI is pointing to which is (see above) the offset 88D where the first byte from disk was loaded. A sector of 512 bytes is going to be decrypted as expected, we can confirm this by checking the value of register DX which is the counter of this loop and is set to 200h (512 bytes) at the instruction 00FA.

Jumping to the decrypted code in Memory

Once all the sectors loaded from disk have been decrypted in memory, it is time to jump to the new instructions. In the code below we can see two important things:

2. 069 - 071: The value at offset 891h in memory will call the decryption function if more sectors need to be decrypted, otherwise will jump to the decrypted code in memory.

The next step will be to create a perl script to decrypt the hard disk sectors and come up with the next set of instructions. Specifically, we will be analyzing how the INT 13 Hooking is being implemented!!!! and how the malicious kernel-level drivers are loaded before the OS starts.

Currently I am swamped with other stuff but I will try to dedicate some hours in the near future. Meanwhile, please share any thoughts.